Every year since 2004 The United States Pony Clubs, Inc recognizes an outstanding Club, Center, Region, or Member with the Flash Award. The award was created by Kathy Aranosian, owner of Flash, the horse chosen as the USPC 50th Anniversary Breyer Model. She wanted to sponsor a yearly award to encourage the kind of teamwork generated by her club when they were writing about Flash. Entries are taken by essay and are due November 1st each year. The award is given at the USPC Annual Meeting and Equine Symposium.

This year’s winner was sent in by Erica Kirchgatter a C-1 Traditional member of Claim Jumper Pony Club in the Middle California Region. Erica, along with other members of her club helped evacuate animals and buildings during the devastating Butte Fire that destroyed many acres of land where Claim Jumper Pony Club members live. Read along as she shares her story. 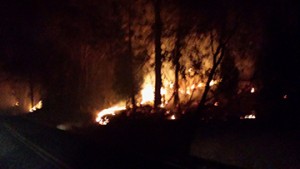 On September 9, 2015 the Butte fire broke out on Butte Mountain Road in Amador County, just outside Jackson, CA. The fire began to close in on Mokelumne Hill and Mountain Ranch CA. For Claim Jumper Pony Club that was bad news. Their club storage unit was located at Hidden Valley Ranch in Mountain Ranch, CA. The owners of Hidden Valley Ranch; Shannon, Dean, Alexandra, and Isabella Linton, were former Pony Club members and had four horses on the property along with other animals. The Butte Fire was moving directly towards Hidden Valley Ranch. Noticing the flare up the members of the Claim Jumper Pony Club collaborated on a plan to evacuate the unit and help the Linton family any way they could.

So, on September 10th their plan was set in action. Four members came to help, along with their families. Those members were Erica Kirchgatter, Brandon Starks, Griffin Starks, and Taylor Fautt, their family members were Tina Kirchgatter, Tricia Starks, and Janna Fautt. The club even had some extra helpers such as Conner Kirchgatter, Erica Kirchgatter’s brother, Scott Griffiths, a former Pony Club Father with a sister who graduated with her B certification, and Valerie Strait, a grandmother to three of our members. Jeff Fautt, Taylor and Morgan Fautt’s uncle was also there to help.

Around 7:30 pm everybody met at the Zippy-Mart gas station, just outside Valley Springs CA, to touch base with each other before going to Mountain Ranch CA. When they arrived at Hidden Valley Ranch they found out that the Butte Fire was moving closer to the area and was only 6 miles away. The members had just enough time to remove 52+ saddles and a few of the bridles, filling 2 truck beds and a 10 seater van. All of this tack is used for Tack O’Rama; which Claim Jumper Pony Club needed for the up and coming clinic in March of 2016 for the Middle California Region. After the members loaded what they could fit into their vehicles they brought all the tack to Tina and Eric Kirchgatter’s house, where they have an extra unit for all of the tack to go into. 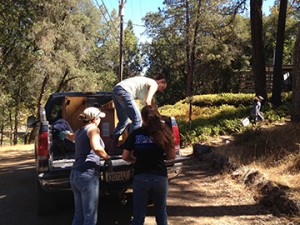 The fast moving Butte Fire continued to move toward Hidden Valley Ranch, causing the Linton family to evacuate around 3:30 am Friday morning. Their fast evacuation caused them to have to open their gates and let their four beloved horses loose. Shannon Linton wrote their cell phone number on their palomino gelding’s neck so they could be contacted. Hearing the news about the former Pony Club family, CHP Officer Tim Fautt, father to two of our Pony Club members, escorted Chad Strait, Uncle to three of our member’s and some of Chad’s friends up to Hidden Valley Ranch to retrieve the Lintons four horses. When they arrived, they found all 4 horses safe and sound. After they quickly loaded the four horses with the help of the Griffiths, the Linton’s neighbors, into the trailer, they headed to the Calaveras County Fairgrounds in Angels Camp CA the main animal evacuation center, where they dropped the horses off safely and head back up to evacuate more animals.

On Friday, September 11th, Chad Strait and his friends were accompanied by Janna Fautt. They went back up to Hidden Valley Ranch in Mountain Ranch, CA with Tim Fautt as CHP escort to see if anymore animals were left up in that area, they also went to retrieve more of Claim Jumper Pony Club’s tack from the storage unit. Along with a very angry llama, a herd of sheep and their guard dog, and two pigs who were injured, Chad, his friends, and Janna got 20 storage tubs of bridles, girths, and other tack out of the storage unit. They dropped off the animals at the Calaveras Fairgrounds, then brought the bridles to the Kirchgatter’s home. At 2:00 am, Tina Kirchgatter, Eric Kirchgatter, Janna Fautt, Chad Strait, and the other animal rescuers unloaded the 20 storage tubs into the Kirchgatter’s extra storage unit. Throughout the entire weekend, Chad and the other animal rescuers made it their highest priority to remove any and all animals needed to be evacuated from the fire zones.

The fire eventually made its way around Hidden Valley Ranch, only to have the fire change directions and make its way back towards the beautiful valley. Luckily the Firefighters were in the area when the fire change directions and were able to stop it from getting to the Linton’s house along with the storage unit, which still had an entire library’s worth of books. Sadly, the Lintons lost an outbuilding with family mementos and their grandmother lost her art studio and the memorabilia from her years as a teacher. With all the help from so many wonderful people, the Linton Family still have their beloved horses and home, while Claim Jumper Pony Club still has their equipment and library for future members and Tack-O-Rama.