section and everything up till
* * @package Poseidon */ ?> Silver Bullet: A Very Special Pony – USPC Blog
Skip to content

The last of our finalists for the Flash Teamwork Award, Breanna Kaho, a H-B HM member of Run O’The Mill Pony Club in the Lake Shore Region chose to share the story of a special Pony from her area. Those who knew Silver Bullet think he is pretty special. Read more about his story below! 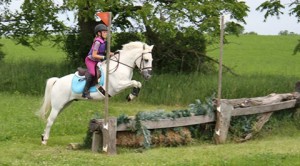 Silver Bullet is an amazing teacher. He may not always be the most perfect pony, but even when he has a spunky day, he is always teaching his rider something. One of his first riders, Natalie, took Bullet to their first rally in 2005. “It was our first dressage test ever and even though we entered the arena in a hand gallop during a walk-trot test, some very nice judge gave us a 55% that we did not deserve”. Even when Silver Bullet has a spunky moment, he always redeems himself. “I remember we did the ground pole course, and it had been pouring all morning, so Silver Bullet was a trooper and safely carried us both through an honest 12 inches of mud” said Natalie. Silver Bullet’s next Pony Club rider was Alex Ullrich, Natalie and Rachel’s brother. Bullet helped Alex achieve his D-1, and they even did Tetrathlon together. Silver Bullet had then been outgrown by the riders in the Ullrich family, so he moved back to Mrs. Hamilton’s farm and was used by ROMPC members again.

His new rider was Lauren Kersten. Lauren’s mother, Lynn, was a member of ROMPC as a child, and practically lived at the Hamilton farm, riding whatever horses she could and helping out. She wanted her daughter to have the same experiences she did, so Lauren began riding Silver Bullet and joined ROMPC. In three short years Lauren went from just learning to ride, to doing beginner novice horse trials with Silver Bullet, and achieving her D-3. Silver Bullet always seemed to take care of Lauren as she was learning. If she would get unbalanced he would always slow down. On one occasion Lauren was unseated after a fence and ended up on Silver Bullet’s neck. Silver Bullet slowed to a stop and slowly lowered his neck so that she could land safely. Silver Bullet seems to truly care for his rider and always make sure they are safe. He even won the “Wisest Pony” award at D rally. Lynn’s favorite memory of Silver Bullet is when Lauren left a gate open on the Hamilton’s farm and Silver Bullet got out into the large grass pasture. Lynn thought there was no way Lauren would be able to catch him, but Lauren just called Silver Bullet’s name, and he came walking right back to her. Lauren moved onto a more advanced mount, and passed Silver Bullet to new ROMPC member Miranda Stamm. 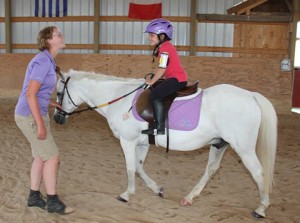 Miranda rode Silver Bullet through this summer, and he allowed her to strengthen her riding and gain confidence. Silver Bullet and Miranda even had a flawless cross-country lesson at ROMPC summer camp this year. Miranda’s mother Nicole said, “Even at Silver Bullet’s age he LOVES cross-country and he galloped around that course like the great caretaker he is. You could just see the enjoyment in his face! ”. After achieving her D-2 with Silver Bullet, Miranda has also moved to a more advanced mount, and Silver Bullet is awaiting his newest ROMPC member!

Silver Bullet has attended D Jamboree, Lake Shore Region’s D camp, several years in a row with both Lauren and Miranda. He is always a hit with all the campers, and even played the role of canvas for some finger painting! This year he saved the day by being used by camper, Madylyn Mientke, who would have had to miss out on some of her rides due to sharing a horse with her sister. No one wanted Madylyn to miss out on her lessons, so she rode Silver Bullet for half of her lessons. Madylyn fell in love with Silver Bullet and had such a great time riding him. Madylyn has since transferred to ROMPC!

Silver Bullet has always brought joy to his riders and his club. These may seem like individual stories, but the confidence and joy Silver Bullet has brought his riders has transcended their relationship, and brought a sense of togetherness to our club and region. He has always inspired teamwork. Everyone comes together to help and cheer on Silver Bullet’s rider, who is often the least experienced and youngest member of ROMPC. He has helped show our club how important it is to help, teach, and nurture our young and less experienced members, just the way he does. He has helped children become excellent confident riders, and given children their first pony ride. At every rally and competition, everyone is amazed with what the 29 year old grey pony can still do. Silver Bullet always has an entourage of members that have met him and love him, and as Laurens mother Lynn likes to say, “His veins are filled with liquid gold and his heart is solid gold”. I agree that Silver Bullet is certainly worth his weight in gold and want to share him with the Pony Club community.