Polocrosse is the King-of-the-one-horse sports. Played similar to polo, but with a racquet where the ball is carried, rather than hit, its a high speed sport that is fun for young and old. Fifteen year old Baker White is a C-1 HM, D-3 Traditional, C-1 Flat member of Cassanova-Warrenton Pony Club in the Virginia Region. Read along as he shares how he was bitten by the Polocrosse bug!

I have been a member of USPC for about eight years now, having joined when I was 7, taking my D-1 on our rotten little pony, Buttercup. I soon moved to a wonderful hunter pony named Charlie, and I progressed through my D-2 and D-3. As I got older however, I began to lose my confidence in the saddle. I was a bundle of nerves riding at my own farm, clinics and rallies were huge endeavors that caused me much anxiety and stress. Sadly, riding simply became no longer fun for me. 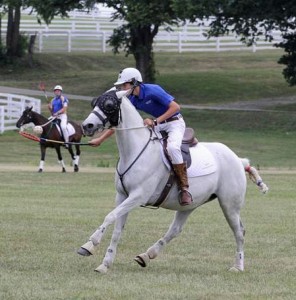 Around age 12, despite my mom’s best efforts, it seemed that I was done with riding and horses. I drifted away from chores in the barn, and found many reasons not to ride, even with my sister and mom in the pasture at home. Interestingly, things took a turn at the 2011 USPC Festival in Lexington, Kentucky, where I had just competed in Quiz. I spent my Festival days hanging out at the unmounted polocrosse demos, and soon learned about a week-long polocrosse camp just a few hours from where we lived. I was excited to give it a try, and despite my nerves, I packed up my stuff and Charlie, and we were off to camp later that month.

While Charlie didn’t quite take to polocrosse, I was hooked. I began to practice as much as I could at home, and as I was getting too tall for Charlie, we went horse shopping the next year. With the valuable input of our new polocrosse friends, we purchased Bella. Bella is an imported Australian Stock Horse who had been playing polocrosse her whole life. Bella taught me more than would seem possible, and with the help of her and a few other very special horses, I became not only much better at polocrosse, but a more confident rider. I quickly let the thrill of the sport overcome my nerves, and my anxiety was replaced by a new theme song, “It’s Always a Good Time!”

Fast-forward through three years and numerous Pony Club polocrosse rallies, Play Days, American Polocrosse Association tournaments, and club practices. I am a completely different rider! While I have advanced past Bella and my other teaching horse, Zima, their lessons stick with me. It’s hard to believe that before polocrosse, I was too afraid to ride in my own pasture, on my own pony! Just a few short years later, I will ride anything I can, and have played countless horses in tournaments and rallies. Last fall, I flew by myself to Santa Fe, New Mexico, to compete in the American Polocrosse Association National Championships on a borrowed horse. I currently play C Grade polocrosse with the APA, and Intermediate/Advanced polocrosse within Pony Club. I have competed in Polocrosse Championships twice, and I won my division’s Best #3 player award at Championships/Festival last summer. When I am not competing, I enjoy teaching other Pony Club memebers how to play polocrosse. I always have a set of rackets with me, and most recently I had a lot of fun showing the UK International Games competitors how to catch and throw the ball! 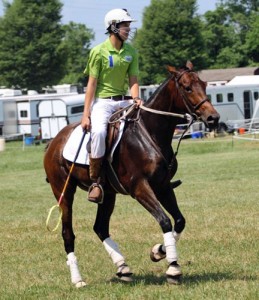 Not only has polocrosse given me the confidence to actually play the sport I love, it has also given me the desire to branch out into other riding disciplines. Through the sport, I have found a new love of riding and horses, one that will last a lifetime. I recently obtained my C-1 Flat and HM certification on my sister’s dressage horse, and rode in a Daniel Stewart clinic over fences on a friend’s horse. Without the adaptability and confidence I learned through polocrosse, not only would I be unable to do things like that, I probably wouldn’t even be riding anymore. The lessons learned in Pony Club and polocrosse have exposed me to a whole new world of fantastic people and horses, while helping me advance through life as a whole with confidence.