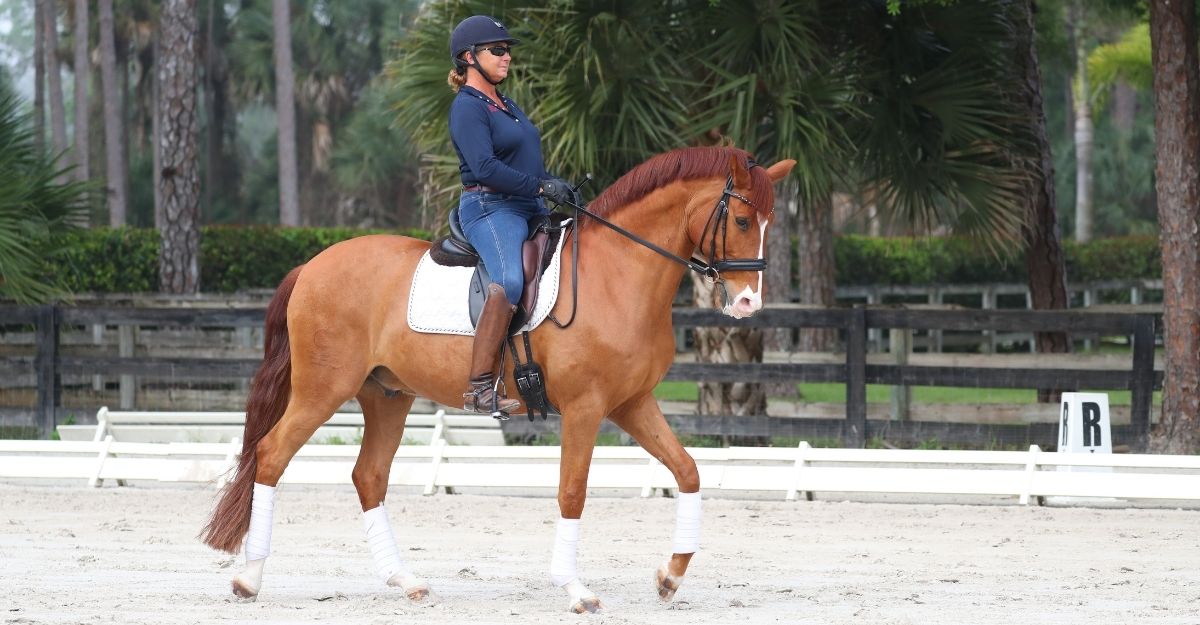 Working in a regular rhythm will not only make your dressage work more effective but will help you when you jump. That’s because once you have a regular rhythm and stride, you’ll develop an eye for seeing a distance to a jump. Then you can adjust the length of stride in that regular rhythm to suit the type of fence you’re jumping.

IMPROVE THE QUALITY OF THE WALK
Even though you do the majority of your jumping in the canter, practicing exercises in the walk and trot first gives you time to learn how to coordinate the aids. It also gives your horse a chance to understand the exercise without dealing with the speed of the canter. Let’s have a look at what makes up high-quality gaits.

A stride of walk is made up of four steps. Starting with the outside hind, the sequence of legs in one walk stride is: outside hind, outside fore, inside hind, inside fore. The length of the space between each step should be the same.

In a good medium walk:

• The rhythm is regular.

• The horse over-tracks by stepping with his hind feet in front of the tracks made by the front feet.

• He has enough activity to easily propel him-self into an extended walk. You don’t have to “rev him up” first.

Feel the Rhythm in the Walk
Here’s an exercise to help you feel a regular rhythm with equal spacing between each of the four steps.

Both a lateral walk and a pace are usually caused by tension and stiffness, especially in the back and neck. However, some horses are actually born with lateral walks. Horses with regular walks also can lose regularity. If your horse has a naturally big over-stride in his walk,it might get lateral if you collect the gait too soon in his training or if you restrict him with your hands. Be sure you have an “elastic elbow” that follows the horse’s head and neck forward and back so you don’t block him (Fig. 2 A & B).

If your horse’s walk gets lateral, send his hindquarters a bit sideways (Fig. 3). You can leg-yield him in a little or out. If he has more education, do shoulder-fore or shoulder-in.

IMPROVE THE QUALITY OF THE TROT
In a working trot your horse goes forward in balance with even, powerful, elastic steps. He shows good hock action as he moves with impulsion.

In one stride of the trot, the sequence of legs is: one diagonal pair of outside hind and inside fore moving together, followed by a period of suspension when all four legs are off the ground, then the other diagonal pair of inside hind and outside fore moving together. When doing the exercise, you should hear yourself counting an even, “One…two…one…two…one…two…”If the rhythm isn’t regular, the first thing you should do is check with your vet to make sure there aren’t any soundness issues.

A common fault in the trot is when the horse hurries his steps so that the forefoot comes to the ground before the diagonal hind foot so that two separate hoof beats are heard instead of one (fig. 4). In this case, your horse is carrying most of his weight (and yours) on his shoulders. The solution is to shift the center of gravity back so that his shoulders can be lighter and freer (explained in Dressage Between the Jumps, chapter 10).

Another common fault is when the hind foot is put down before the diagonal fore-foot (fig. 5). Again, you’ll hear two separate hoof beats. This happens when your horse is lazy with his hind legs and drags his feet along the ground. Activate the hind legs by doing a lot of quick transitions, not only from gait to gait but also within the gait, like lengthenings and shortenings.

The trot also becomes irregular when one hind leg doesn’t reach as far under the body as the other hind leg. This makes the steps look uneven. You may be able to feel this yourself because there’ll be an emphasis on one of the beats of the trot. You’ll find yourself counting, “One, two, one, two.”

If you can’t feel it, ask a friend on the ground to check that each hind leg steps equally under your horse’s body. As mentioned, check with your veterinarian when this is in question, but also keep in mind that you might just be dealing with a weaker hind leg, a sore back, or your own hand “blocking” the hind leg because you’re pulling back on one rein. If it’s a hind leg issue, there are exercises you can work on to strengthen your horse’s legs. Your horse needs to be equally strong with both hind legs so he jumps straight and doesn’t push off more with the stronger hind leg (fig. 6). If he does, he’ll drift to one side over fences.

IMPROVE THE QUALITY OF THE CANTER
I often see jumpers that have four-beat canters. This four-beat rhythm can create all kinds of problems, such as the horse’s balance being on the forehand and not having a clear enough period of suspension to be able to do a good flying change. To help a horse that has a four-beat canter:

This excerpt is reprinted with permission from Dressage Between the Jumps by Jane Savoie, published by Trafalgar Square Books; horseandriderbooks.com.

ABOUT THE AUTHOR
Jane Savoie is one of the most recognized names in the equine industry and for good reason. Her accomplishments and the breadth of her influence are impressive. As a dressage rider, she was a member of the United States Equestrian Team, competing internationally, including a position as the reserve rider for the bronze-medal-winning team at the 1992 Olympics. Savoie was the dressage coach for the Canadian 3-Day Event Team at the 1996 and 2004 Olympics, and coached a number of dressage and event riders at the 2000 Olympics. She is the author of many bestselling books and video programs on riding, training, and sport psychology, and is a popular motivational speaker.